I thought it’d be interesting to look at Scott Walker’s influence on Board of Regents (the current, UW System-wide board) and the proposed Board of Trustees (UW-Madison specific.) Here is a Google Spreadsheetof the makeup of the two boards through 2022. It looks at the two boards under two different scenarios: one where Walker serves out a full four-year term, and one where a recall election is successful and Walker’s term ends on January 3 2013. In both cases, I assume that a Democrat is sworn in on January 3 2015. I did not hazard a guess as to which party wins the 2018 election. I also graphed the percentage of votes on the various boards that are direct Walker appointees below: 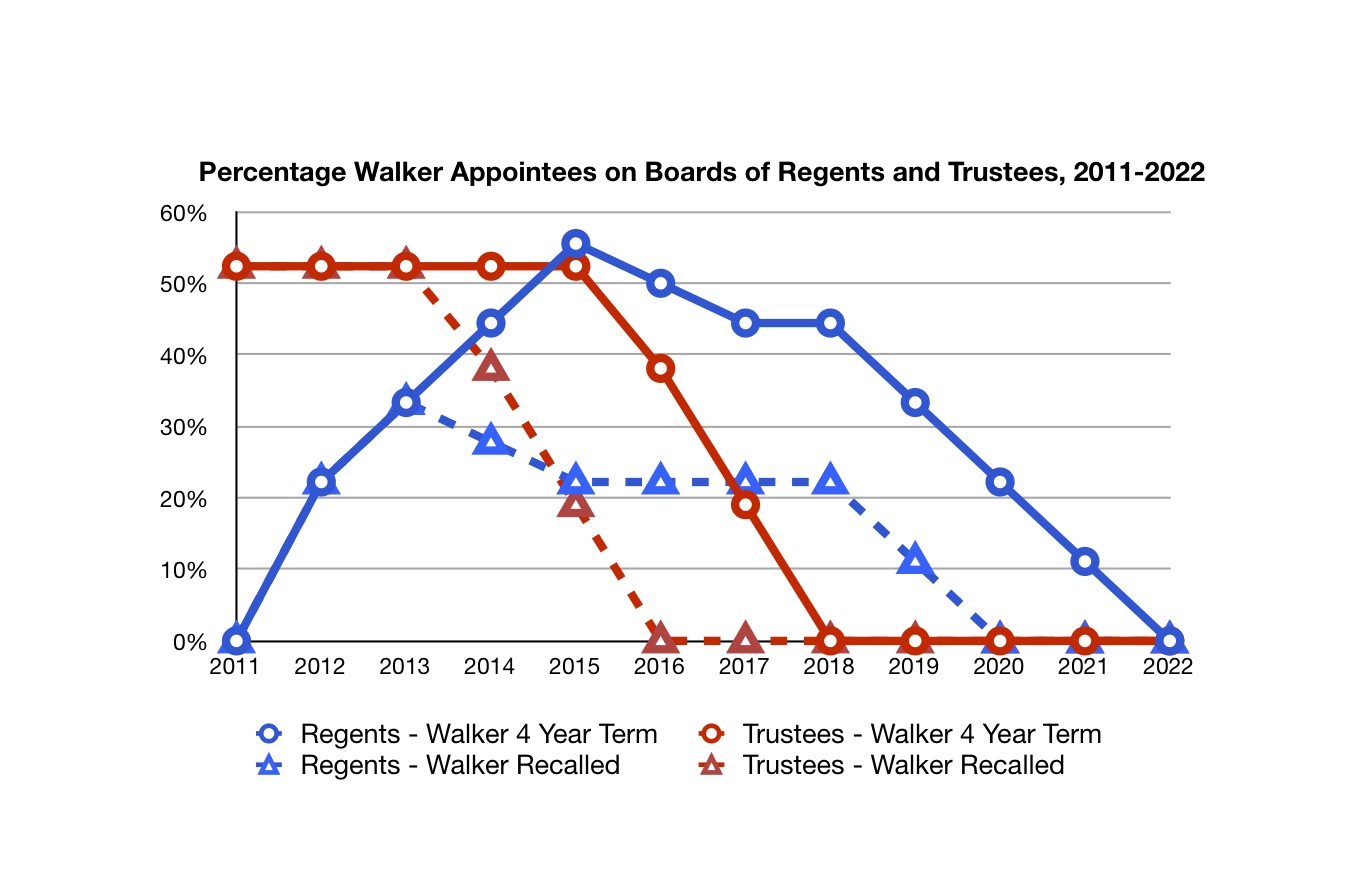 The way to read this spreadsheet is “what do the Boards look like on January 1 of that year?” Regent terms run until May 1 of the year, and (presumably) Trustee terms run until July 1 – so someone listed under 2016 with a term expiring in 2016 will serve for about half the year, and then the Governor will appoint a new person for the 2nd half of the year. To simplify, I cheated a little bit and pretended that for 2011, everyone was already in place for the Board of Trustees.

Some other quirks: I count Tony Evers, the current DPI secretary, as a Democrat. He’s up for reelection in April of 2013, and while I’m pretty certain he’s going to win in 2013, I didn’t include that in the board makeup. There are two student Regents, who serve for staggered two-year terms. Inexplicably, and inexcusably, Doyle did not fill Kevin Opgenorth’s term before he left office. That gives Walker a student appointment on the Board of Regents right now, until May 1 2012, that otherwise would have been held by a Doyle appointee.

Another objection is that I never account for the possibility that people may leave their term early. Flipping through their biographies, the Board of Regents aren’t exactly spring chickens, and unfortunately, they don’t always make it through their terms, as was the case with much-loved Milt McPike. With so many Doyle appointees, it would not surprise me at all if Walker got an extra one or two seats in the next four years, who might serve until 2017. If Walker fills a Doyle seat, it only goes until the regularly scheduled end of the term.

All of these predictions depend on how much you want to trust the Faculty, Staff, Students, Alumni Association, WARF, and UW Foundation to make “good” picks, and how much of a chance you hope the Regents all have no life-altering events during their term.

However, it’s worth remembering that we’re thinking about the future of the University for the next generation or more. The exact makeup of the Board, at this particular instance in time, should be very low on your arguments for or against a Public Authority model and Board of Trustees for the UW-Madison.